What a terrific meeting this month!  First, we had some great show-and-tell: 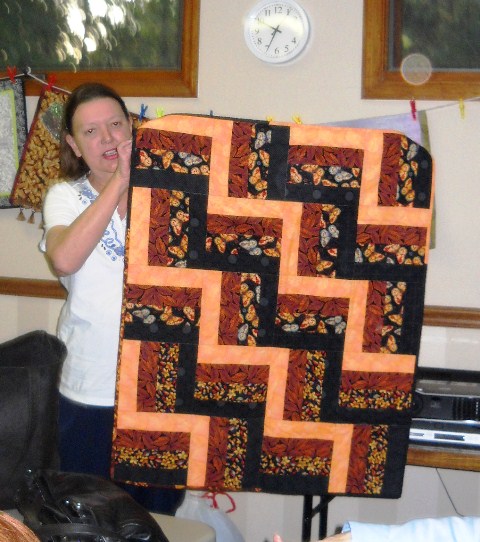 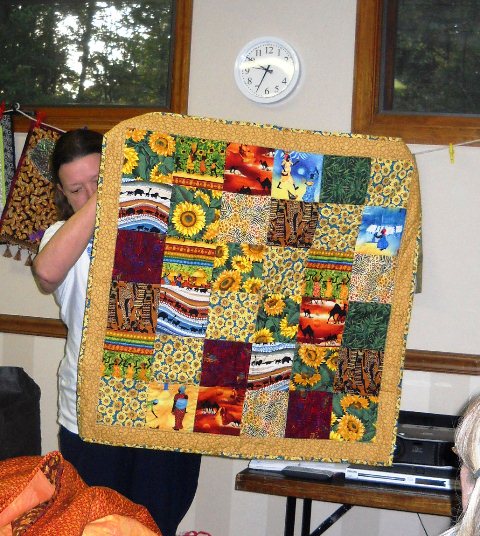 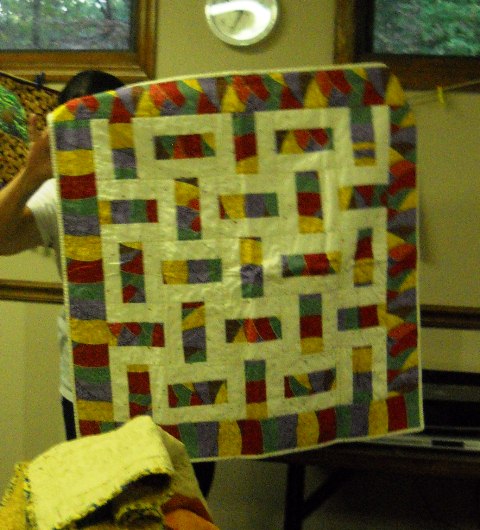 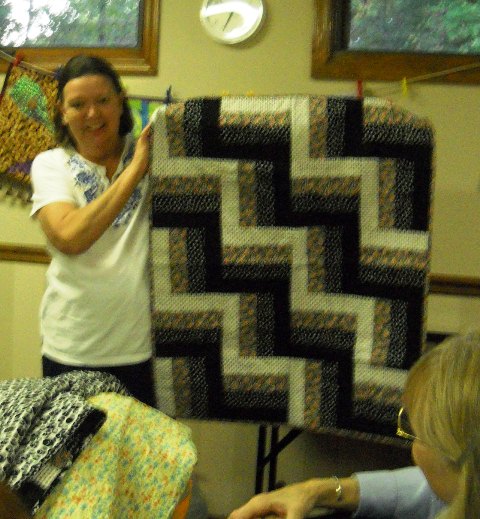 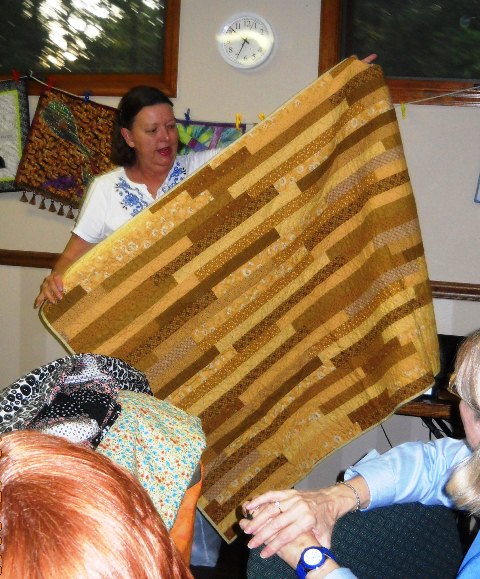 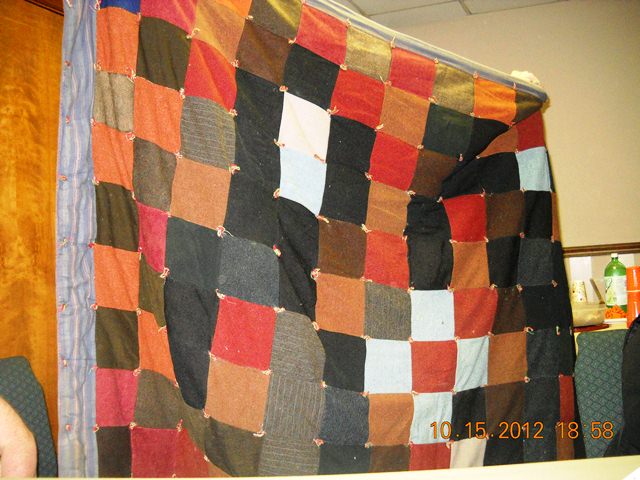 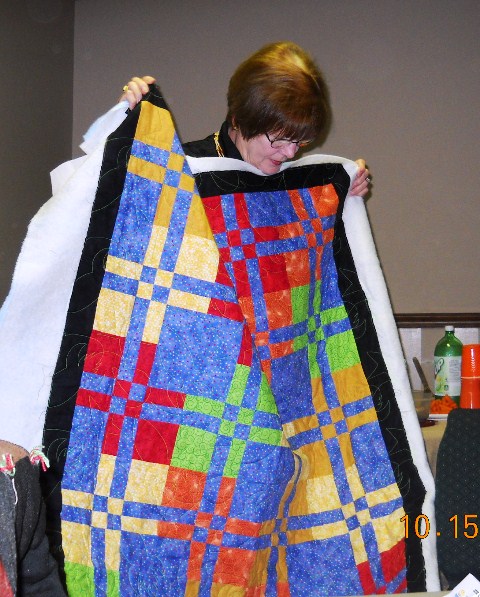 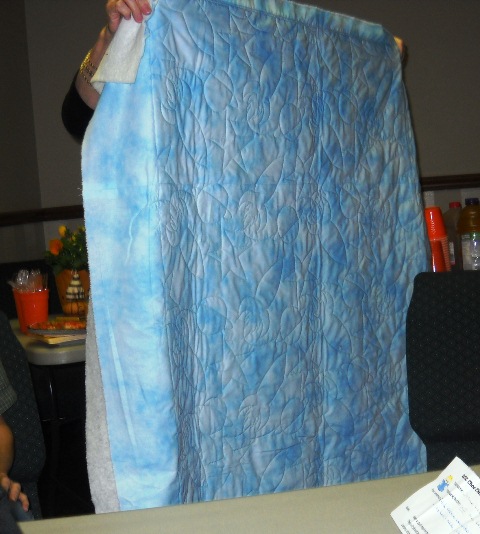 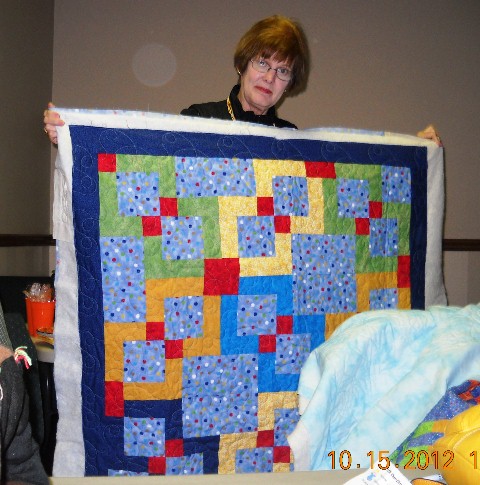 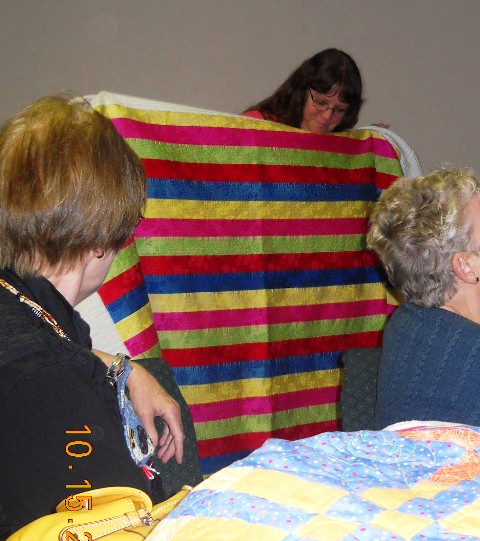 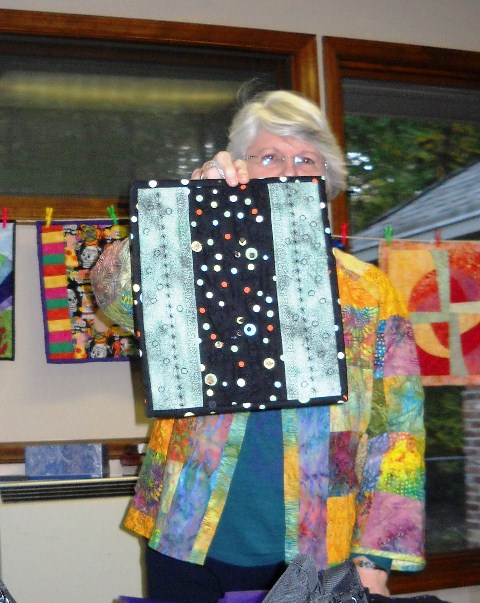 Then we had the big reveal of quilts for the Novel Challenge.

Each participant was instructed to open their book to a certain page picked at random and write down the fifth sentence on that page. The challenge was to use that sentence as inspiration for a small quilt using whatever technique(s) they wanted.

Some sentences seemed to be more challenging than others (I thought mine was the worst), but we had a lot of fun and everyone did a great job on their quilts. This is certainly a creative group!  Here are all thirteen quilts with their makers and sentences: 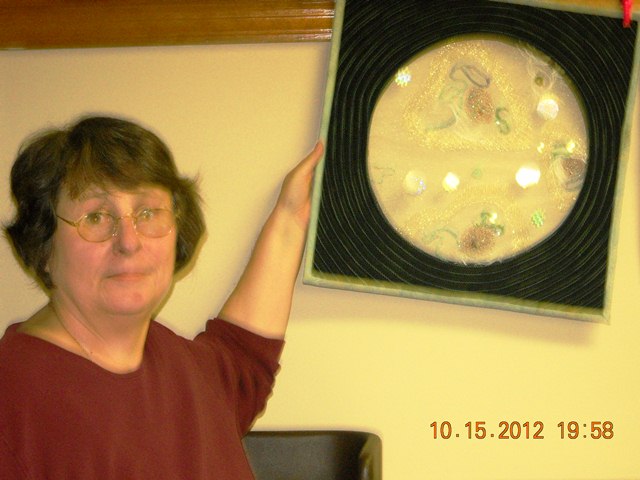 Linda Smith
Book: Another Roadside Attraction by Tom Robbins
Sentence: ‘Isn’t that a disgustingly romantic way for a scientist to behave?’ 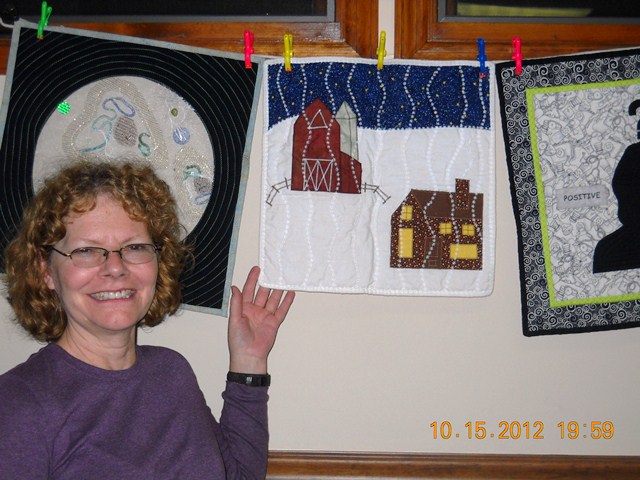 Pam Graham
Book: White Out by Ken Follett
Sentence: ‘The four kids ate quickly, they retired to the barn to watch a DVD movie called Scream2, leaving six adults around the table in the dining room; ___ and Ned, Olga and Hugo, Daddy at the head and Kit at the foot.’ 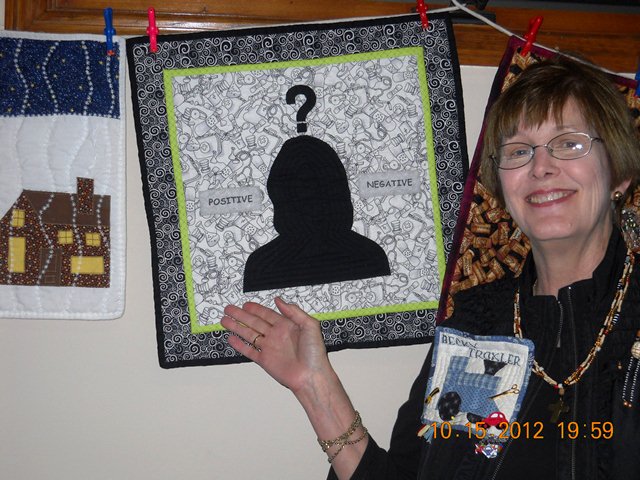 Becky Troxler
Book: Eternal on the Water by Joseph Monninger

Sentence: ‘She would have the results of Mary’s test.’ 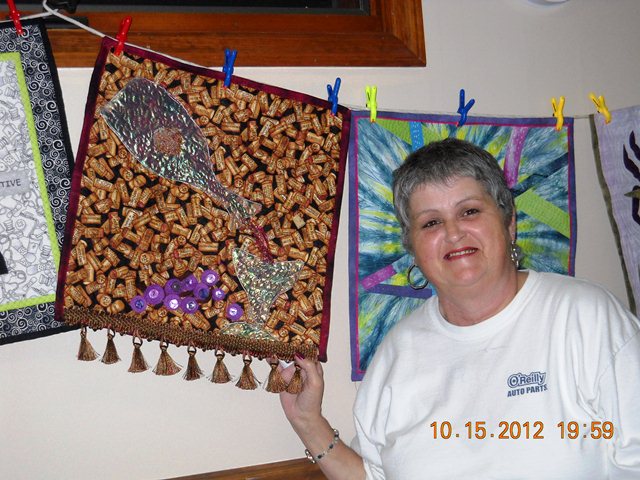 Sharon Griffith
Book: Gone With the Wind by Margaret Mitchell
Sentence: ‘Then you’ll be more comfortable.’ 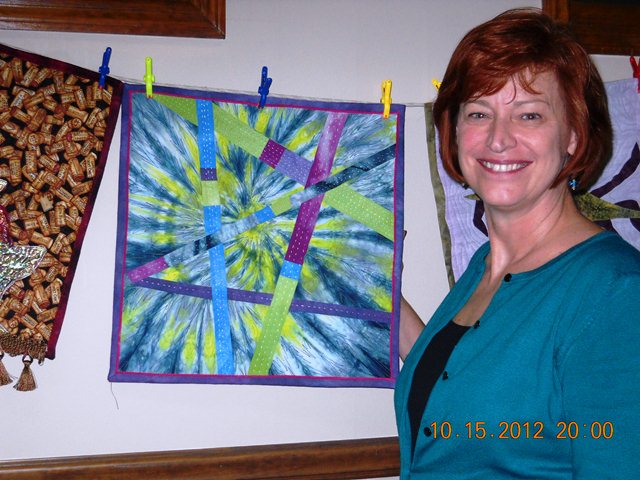 Cristy Clark
Book: State of Wonder by Ann Patchett
Sentence: ‘He began to rush his other customers by shouting at them and no one objected to his harassment.’ 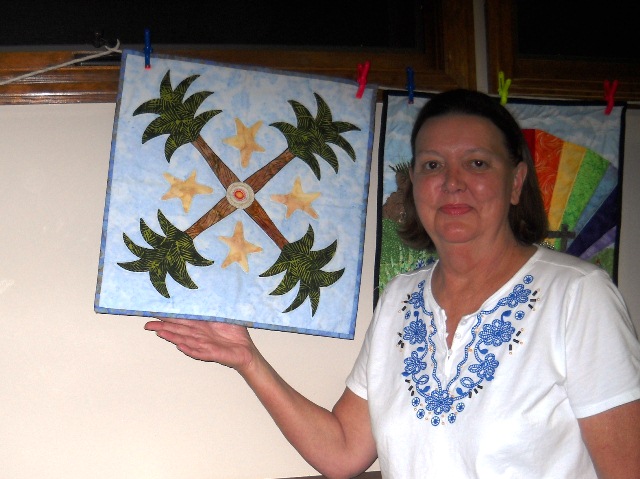 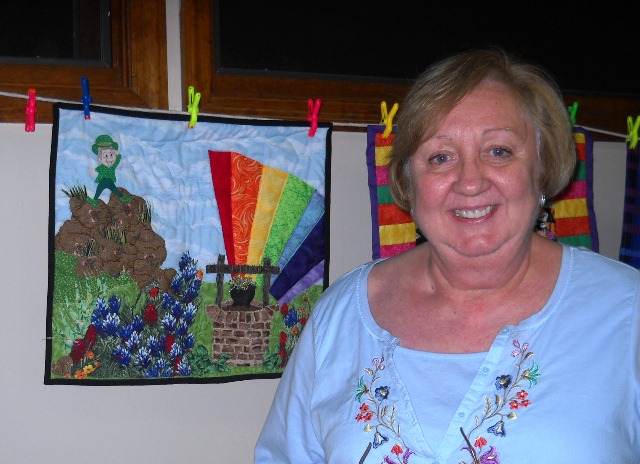 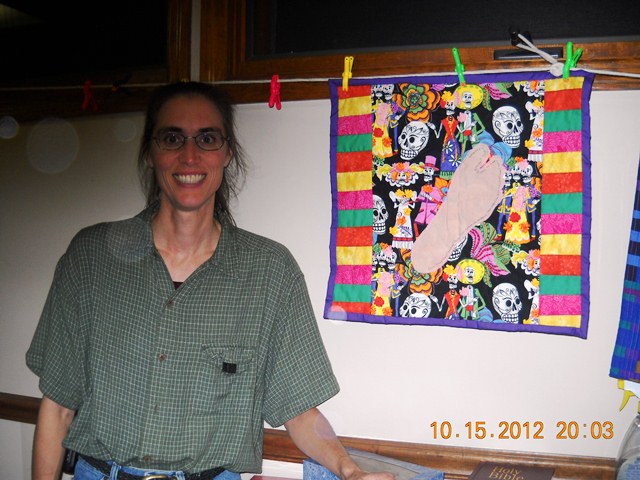 Joanna Lienti
Book: Stiff by Mary Roach
Sentence: ‘Each cadaver was outfitted with strain gauges and lead cells in its heel and ankle and clad in one of six types of footwear.’ 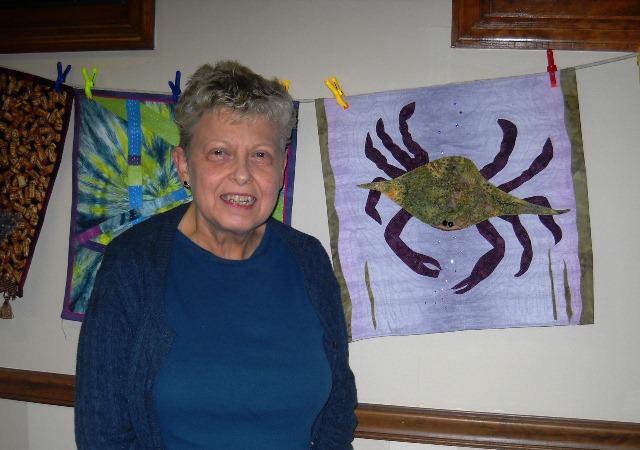 Sherry Baldwin
Book: The Union Quilters by Jennifer Chiaverini
Sentence: ‘A muscle worked in his jaw.’ 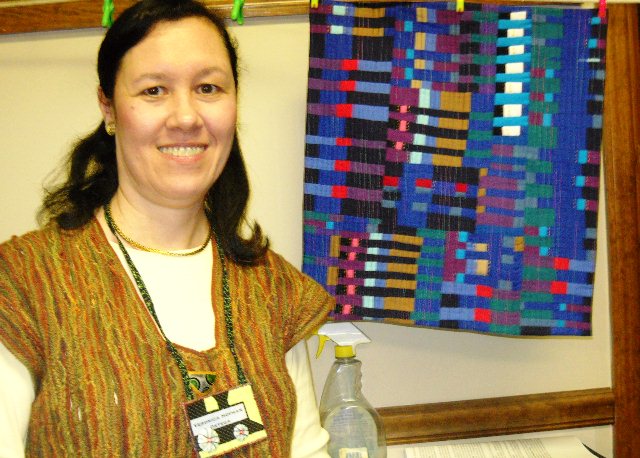 Veronica Hofman-Ortega
Book: Steve Jobs by Walter Isaacson
Sentence: ‘They had grown up among movie stars, but to them Jobs was a true celebrity.’ 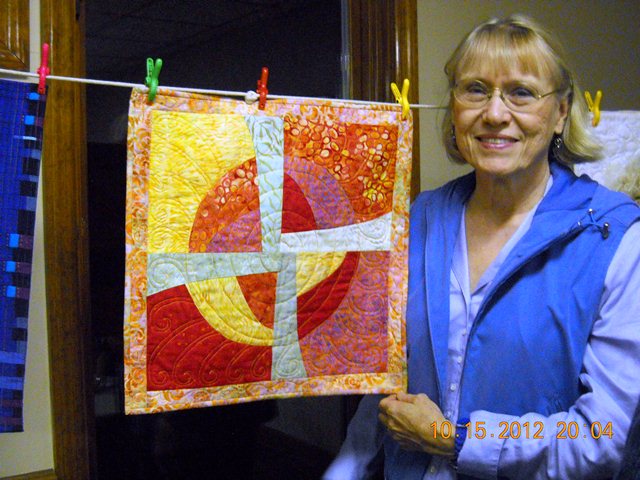 Vista Mahan
Book: One True Thing by Anna Quindlen
Sentence: ‘But of course I remember that in one way I lost the lynch pin years before, not long after I acquired the date book.’ 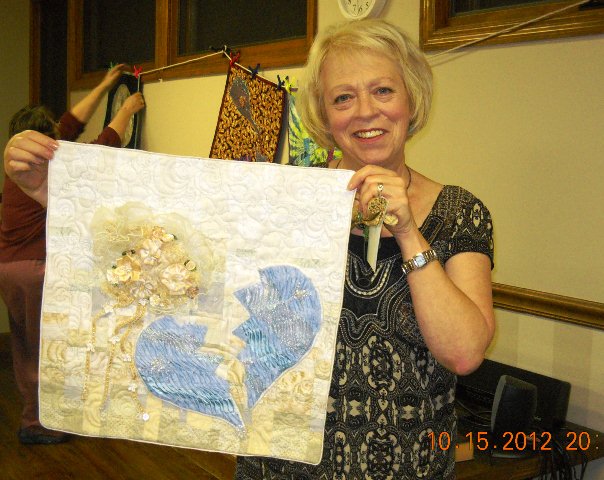 Ginny Minninger
Book: Abundance by Sena Jeter Naslund
Sentence: ‘Had I been married to Artois, I would not find myself eighteen years old and still a virgin.’ 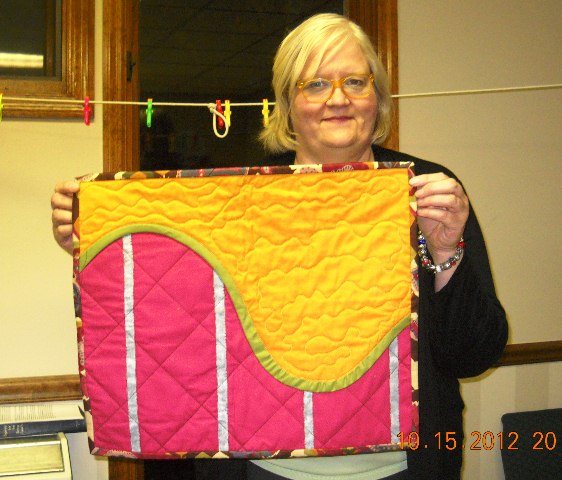 Janet Suber
Book: Half Asleep in Frog Pajamas by Tom Robins
Sentence: ‘You prepare to scream.’

Posted by Choo Choo Quilters at 6:07 PM No comments:

Inspired by a sentence in a book (or novel), members of the Choo Choo Quilters will reveal their 2012 Challenge Quilts at this evening's guild meeting. Any quilting technique or combination of techniques could be used to create a small quilt approximately 18" square.
Earlier this year, guild members were asked to bring a book or novel to the guild meeting. Participants were instructed to open the book to a specific page, paragraph and sentence and create a quilt inspired by this found sentence. Some of the sentences will no doubt flex the imaginations and tap deep into the creativity wells of the participating quilters.

Join the Choo Choo Quilters for this Guild Challenge exhibit tonight, October 15, at 6:30 pm. Refreshments will be served and visitors are welcome.
Posted by FiberAntics at 10:54 AM No comments: